The Covered Wagon and the Rediscovery of a Western Epic 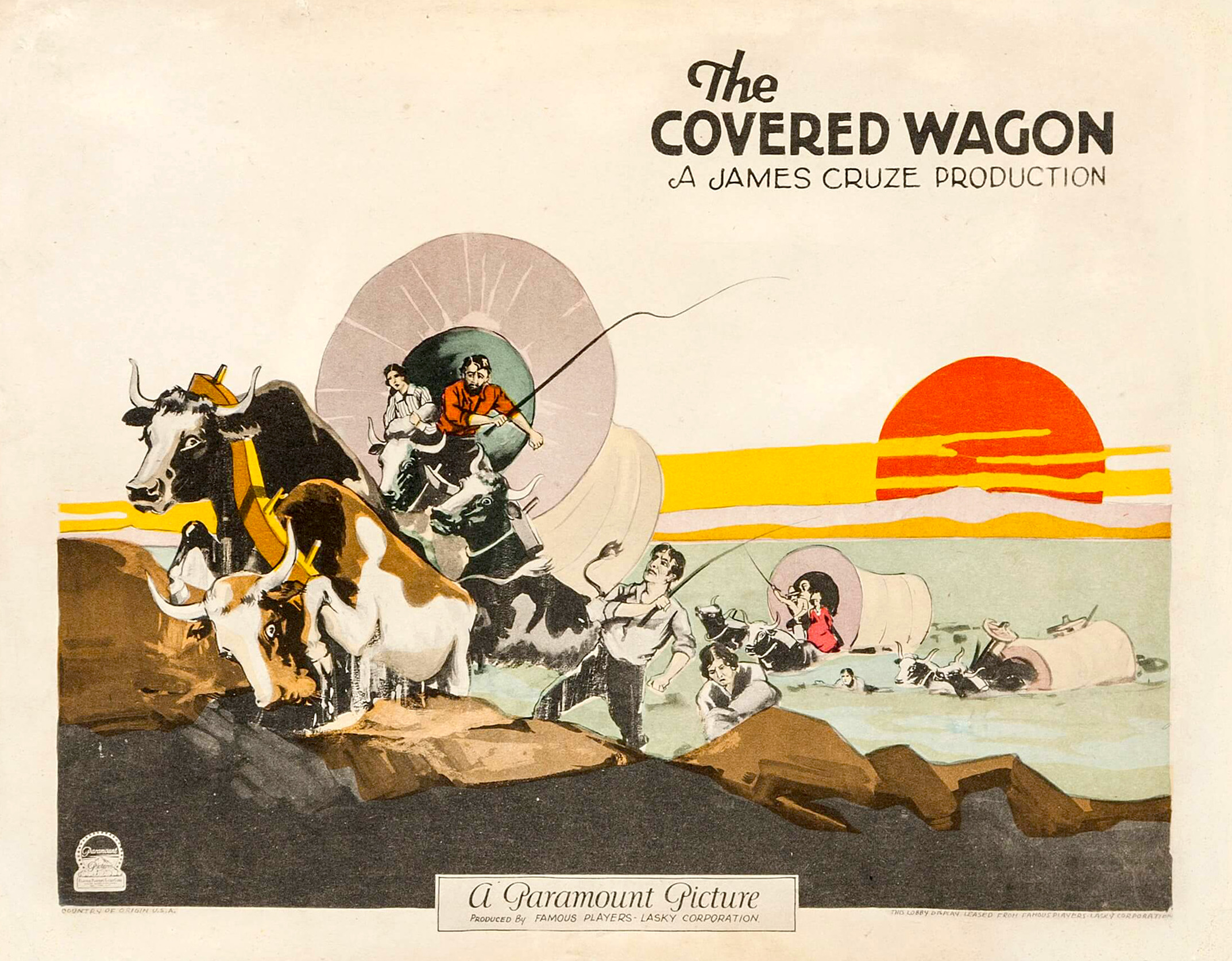 The Covered Wagon (1923) is one of the most important films in the history of the Western genre, even though it has been mostly forgotten today. It was the top grossing film of 1923, earning nearly twice as much at the box office that year as Cecil B. DeMille's first attempt at filming The Ten Commandments (1923). It was one of the highest grossing films of the 1920s, and it was the highest grossing Western of the decade. It outgrossed even Chaplin's The Gold Rush (1925). It was said to be Warren G. Harding's favorite film; he screened it at the White House. The film's popularity created the conditions that made John Ford's The Iron Horse (1924) possible the following year, without which Ford might have never returned to the genre. Although The Iron Horse is more widely remembered today, in no small part because of Ford's later successes and enshrinement as the greatest director in American cinema, in its time The Covered Wagon was a far bigger hit and much more well-regarded by critics and audiences alike. The success of The Covered Wagon sparked a major resurgence in the genre's box office viability and popularity at a time when big budget Westerns were on the decline, showing that an epic-style Western was not only possible, but could prove a major hit.

Why was The Covered Wagon so popular and impactful? From today's point of view, the film's appeal might at first appear mysterious. The cast boasts no major stars, though the actors were relatively well-known in the 1920s. Lead actor J. Warren Kerrigan was making a comeback after a self-imposed exile, but he retired from acting permanently the year after Covered Wagon's release. Lois Wilson, who played Molly, had a long and successful career, working with director James Cruze eight times in all, but the role for which she is best known, the title role in William C. de Mille's Miss Lulu Bett (1921), was already behind her. The best films of Alan Hale, who played the villainous Sam Woodhull, were well ahead of him: his career as a prolific character actor would not flower fully until the talkies. Scottish character actor Ernest Torrence, the grizzled and comical yet bloodthirsty sidekick to Kerrigan's protagonist, was known primarily for playing villains, as in the hit screen adaptation of Tol'able David (1921), where he played opposite Richard Barthelmess, and in the earliest movie version of Peter Pan (1924) as Captain Hook. His promising career was cut short in 1933. The director, James Cruze, had been successful in the past (he had directed dozens of films, many starring "the screen's most perfect lover," Wallace Reid, and others with Roscoe "Fatty" Arbuckle, Will Rogers, and even Harry Houdini), but The Covered Wagon was his breakout hit, a box office juggernaut unlike any he had ever been involved with.

In the standard style of melodrama, Will Banion (Kerrigan), a hero with a secret, is hired to lead a wagon train to Oregon. He falls in love with Molly (Lois Wilson), who is pledged to Sam (Alan Hale), who turns out to be not as nice as he appears. Good news: the guy who wears the white hat gets the girl; the guy who wears the black hat gets a bullet. While the story doesn't offer much opportunity for invention, Cruze's staging of spectacle, photography of landscape, and use of location provided a feast for the eyes. He was helped by his intimate knowledge of Utah and its people, having been born and raised in Ogden, and he knew the terrain he wanted to shoot and how to do it. The Covered Wagon was filmed on Utah's border with Nevada, in and around Garrison and Snake Valley. The film used many authentic covered wagons, borrowing, renting, or buying them from families who still possessed the prairie schooners their ancestors had used less than 50 years before. The Covered Wagon has a documentary quality in its attention to detail and claims to accuracy in the depiction of the river crossing, the buffalo hunt, and the wagons themselves. The final scene presents us with, as the intertitle puts it, "The home of an early settler in Oregon," resembling something like a living museum. This quasi-documentary feel suggests that Cruze and producer Jesse L. Lasky may have been trying to capitalize on the success of Nanook of the North (1922), the pioneering documentary by Robert Flaherty that had been an enormous hit and had discovered a public interested in careful attention to realistic detail.

In 1923, more than half the population of the country lived east of Chicago, and while Cruze knew the territory, to most Americans, the West itself remained mysterious, attractive, and romantic. Most people had little chance of ever seeing the West in person. Los Angeles and San Francisco each had a tenth the population of New York; no city west of the Mississippi had a population of over 1 million. This would not last long: the population of Los Angeles more than doubled by 1930. The West was still exotic and distant, despite (and because of) decades of westward migration, dime novels, and Western serials and feature films. Western movies were as close as many easterners would get to seeing the region for themselves, not to mention the millions around the world, particularly in Europe, who dreamed of emigrating to America and owning their own piece of the American dream. The spectacular landscapes found in American Westerns and other adventure films were a major source of their appeal for both domestic and international audiences.

The Covered Wagon dramatized the West on an epic scale, using Utah landscapes and enormous sections of land to stage spectacular scenes of Native attacks and coordinated wagon maneuvers against a background of mountains and scrub specific to the land west of the Rockies. It's a cliché to say the landscape is treated like a character; in the case of The Covered Wagon, it might be more accurate to say that it frequently serves as a dancefloor for Cruze's wagon choreography. The arrival of the Liberty train, captained by the heroic Banion, is a truly impressive display of coordinated, mass wagoneering.

The way the intertitles frame the film's conventional melodrama tell us a lot about the way The Covered Wagon appealed to its audience. As we might expect from a film adapted from a novel by Emerson Hough, champion of progressive causes and of the tall-walking, big-stick-carrying Theodore Roosevelt, the epic grandiosity and overt ambition of crafting the history of the American Empire cannot be missed in the early intertitles: "The blood of America is the blood of pioneers—the blood of lion-hearted men and women who carved a splendid civilization out of an uncharted wilderness." "With dauntless courage, facing unknown perils, the men and women of the ‘forties flung the boundaries of the nation westward, and still westward, beyond the Mississippi, beyond the prairies, beyond the Rockies, until they bounded the United States of America with two Oceans." These words invite an audience, a nation, to think of themselves as conquerors, as the victors of history itself. They give permission to a nation of people to see themselves as special, the descendants—whether through blood or through self-conception is a distinction without a difference—of brave warriors and pioneers.

The savvy producers at Paramount generated crossover appeal between media forms by featuring the famous song "Oh, Susanna!" in a prominent role, superimposing the song's sheet music over an image of Jed, Molly's little brother, playing the banjo early in the film. This sheet music, branded with images from the film, including Johnny Fox as Jed Wingate and Ernest Torrence as Bill Jackson, as well as a mounted Native and a landscape shot, would have been available for purchase in the lobby of the family-friendly movie theater or picture palace where the film played.

The film's success may have been something audiences were ready for after years of childish cowboy programmers. Prestige westerns were not on the horizon when The Covered Wagon rolled into town. William S. Hart, the genre's first superstar, was at the end of his career, retiring after 1925's Tumbleweeds. He was also nearly 60 years old, and had never been a young cowboy. Although Tom Mix was a major star and box office draw, his action-oriented films lacked the historical flavor, the aspiration to epic status, and, especially, the spectacular locations that made The Covered Wagon what it was. John Ford had made dozens of programmers with Harry Carey, but had not directed a real western since 1921.

Traces of the legacy of The Covered Wagon can be seen throughout the later history of the Western genre. In many ways, the film's main inheritor is not The Iron Horse but rather Howard Hawks' Red River (1948), most obviously in the careful rendering of the masses of cattle and wagons on the move. Torrence's characterization of Bill Jackson, with his unerring though not entirely comprehensible loyalty to the protagonist, looks forward to similar comic foils, especially Walter Brennan's roles in Howard Hawks' Red River (1948) and Rio Bravo (1959). Kerrigan's Will Banion is the kind of buckskin westerner later portrayed by John Wayne in The Big Trail (1930), Monty Clift (and Wayne, in the early scenes) in Red River, Alan Ladd in Shane (1953), Kirk Douglas in The Indian Fighter (1955), and Charles Bronson in Once Upon a Time in the West (1968). Banion's awkwardness with Molly (and Kerrigan's awkwardness with Wilson) also looks forward to similar qualities in the cowboy personas of Randolph Scott and the Duke. It's worth reiterating: if not for the enormous success of The Covered Wagon, it's entirely possible John Ford would never have made The Iron Horse. And without The Iron Horse, Ford's first epic Western, would there be Stagecoach? My Darling Clementine? The Searchers? Would the Western have come back as a genre worthy of prestige, of seriousness? Would there be any Westerns at all? For myriad reasons, The Covered Wagon is certainly a landmark in the history of American cinema, not only for what it was, but for what it opened up.

Matt Hauske has a PhD in Cinema and Media Studies from the University of Chicago, and teaches film history and media theory in Chicago. He is writing a book on Westerns and American art, leisure, and culture after World War II.