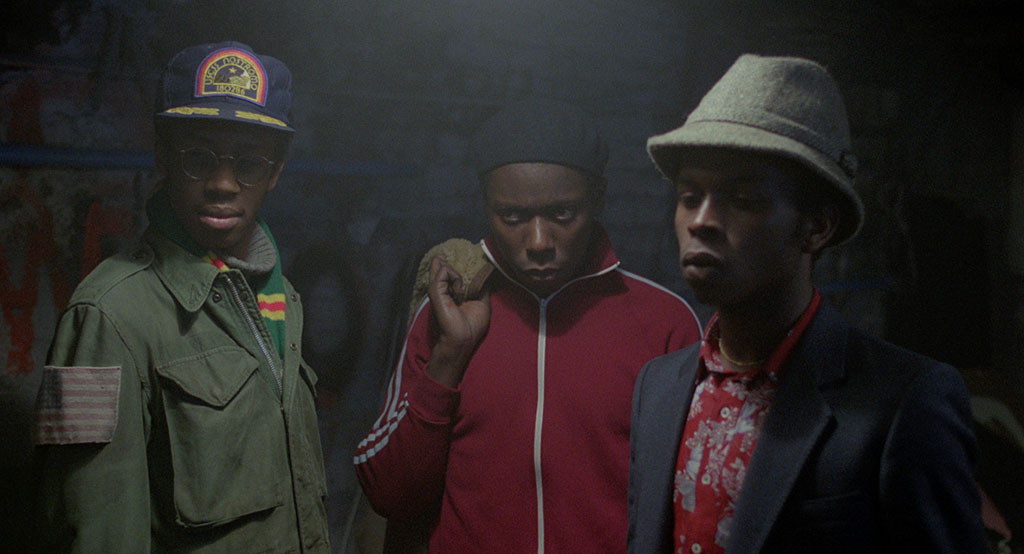 In 1979, a Conservative government led by Margaret Thatcher swept into office in the United Kingdom. Invoking the Vagrancy Act of 1824, the Tories gave the police new powers to stop and search people based only on "reasonable suspicion." Members of Britain's black community— primarily Caribbean émigrés and their descendants from the "Windrush Generation" who were invited to England to fill job vacancies in the post-war economy—were especially affected by Thatcherism's cruelties. What came to be known as the "sus laws" were applied disproportionately to them, particularly young males, and an already frayed relationship with the police began to deteriorate. Austerity measures that led to recession and skyrocketing unemployment, especially in black neighborhoods, caused even further tension, compounded by the daily indignities of British racism, both institutional and interpersonal.

This socioeconomic powder-keg provides the backdrop for Franco Rosso's 1980 feature film Babylon, produced during the first year of Thatcher's decade-plus reign. Ostensibly a coming-of-age story about a crew of young lads and reggae lovers in South London's sound system scene, Babylon paints a powerful indictment of what Jamaican slang would call the "shitstem" of police harassment and brutality, xenophobia and white supremacy, alienation and economic deprivation. For those versed in West Indian dialect, the film's title leaves little doubt that the source of the characters' misery is England itself: Thomas H. Slone's 2003 book Rasta Is Cuss: A Dictionary of Rastafarian Cursing defines the term "Babylon" as "a catch-all maledictum of Biblical derivation: the establishment, police, whites, white society."

Babylon was a generational statement that very few people initially saw. Rosso co-wrote the screenplay with future Quadrophenia scriptwriter Martin Stellman in 1974 and pitched it to the BBC, but ultimately the network passed on producing it. The script was likewise rejected by the production arm of the British Film Institute, before Mamoun Hassan of the National Film Finance Corporation took a huge chance and backed the film. Shot on location in South London over six weeks in 1979, Babylon premiered at the 1980 Cannes Film Festival, but American distribution hopes were dashed when the New York Film Festival chose not to include it, and the film remained unreleased in the US until 2019.

Babylon was a critical success in the UK—Variety wrote that it had "more heart and soul than any home-produced feature of the last 20 years"—despite initially receiving an "X" rating from British censors that restricted it to audiences over 18 and hamstrung its distribution. Passed around by fans on bootleg VHS tapes, Babylon eventually became a cult film, comparing favorably to such notable ensemble dramas as Martin Scorsese's 1973 Mean Streets and Danny Boyle's 1996 Trainspotting (or, with its black protagonists, Michael Schultz's 1975 Cooley High and John Singleton's 1991 Boyz n the Hood). Finally given a proper restoration and release, Babylon now stands as a crucial document of British black youth culture and one of the most important cinematic rediscoveries of recent years.

It took an outsider's perspective to connect the dots and capture the tumult of the time. Rosso (1941-2016) was born in Turin, Italy, before moving to England at age eight and later attending the Camberwell College of Arts and the Royal College of Art. He served as an assistant on Ken Loach's landmark 1969 drama Kes, edited Horace Ové's 1971 doc Reggae, then moved into directing documentaries, including a 1973 short on the Mangrove Nine (a group of black activists in Notting Hill falsely charged by London police with inciting a riot; their subsequent acquittal caused the first official admission of "evidence of racial hatred" within the police ranks) and the 1979 TV documentary Dread Beat and Blood about dub poet Linton Kwesi Johnson. When production began on Babylon, Rosso approached Johnson about providing a soundtrack, but Johnson passed on the offer and referred him instead to Dennis Bovell, who had played on LKJ's 1978 debut and produced his 1979 album Forces of Victory.

Bovell was an auspicious choice, as one of the most important dub producers of the last 40 years and a crucial link between British reggae and the punk and post-punk scenes. Beginning his career with the London reggae band Matumbi, as well as the DJ behind the Jah Sufferer sound system parties, he eventually became known by the alias "Blackbeard," one of the UK's most sought-after producers, working with acts like Orange Juice, Thompson Twins, Bananarama, Madness, Fela Kuti, and Ryuichi Sakamoto. In 1979 alone, he produced Janet Kay's British hit "Silly Games" (#2 in the singles chart), probably the most important track in the development of reggae's "lovers rock" genre; the debut album Y by Bristol post-punk political firebrands the Pop Group; LKJ's aforementioned Forces of Victory; and the Slits' classic debut album Cut, all in addition to the soundtrack for Babylon. Aspects of the film's narrative were partially drawn from Bovell's own life as well, especially the 1974 incident when police stormed his sound system party, beat the attendees as they fled, and charged him with inciting a riot, leading to a legal battle that was a cause célèbre in the British media.

In Babylon's opening moments, the alien-sounding burble of dub echo-effects immediately heralds a world heretofore unseen on British screens. "There was absolutely nothing that was about the life of young Londoners," Stellman told Wax Poetics in 2014. "We were operating in a complete vacuum." Just as scarce then were any depictions of the lives of people of color in UK films or TV shows (save for Ové's little-seen 1976 feature Pressure). Sympathetic characters played by black British actors were such a rarity, Babylon's subjects might as well have been from outer space (Ital Lion's tech wizard Scientist even wears a crew cap with the logo of the USCSS Nostromo from Ridley Scott's Alien). Babylon's characters shuttle back and forth amidst a bleak landscape of grimy billiard halls and rubble-strewn vacant lots, trash fires burning amidst bombed-out landscapes that look as if the Blitz had occurred the previous week and not over three decades earlier. White society seems to offer only a world of empty consumerism, one that's either bizarrely off-putting (a poster on the wall of a tube-station escalator reads "Does your kettle match up to your percolator?") or utterly off-limits (thanks to the "sus laws," protagonist Blue's nighttime stroll past shuttered windows in the shopping district turns into a frantic race for his life).

Babylon's kitchen-sink realism and gritty authenticity likely owe a debt to Loach's Kes, as does the use of subtitles to translate the characters' Jamaican patois. Given Rosso's documentary background, some scenes even have a charming cinema-verité quality, like Lover and Sandra's engagement party, where guests eat plates of mutton and rice while couples slow-dance to Cassandra's "Thank You for the Many Things You Do." The church hall where the party takes place is one of the few "safe spaces" in the film. Every interaction with whites is fraught with potential peril—exploitative bosses, patronizing opportunists, fascist thugs, police who act with impunity— and every physical space is subject to unwelcome invasion. When a white neighbor bangs on the garage where the Ital Lion crew stow their gear to complain about the volume of their music, her tirade quickly becomes racial. "This was a lovely area before you came here," she hisses, telling them to "fuck off back to your own country, you jungle bunnies." Beefy, the quickest to temper of the guys, replies, "This is my fucking country, and it's never been fucking lovely, lady, it's always been a fucking tip"—British slang for rubbish dump—"for as long as I can remember!"

Those audiences who were able to see Babylon could easily identify with the film's characters, disenfranchised youth with few prospects because the Thatcher government had already written them off. Blue is simply trying to forge his own identity, but he's thwarted and assaulted at every turn, not only because of the color of his skin but also his dreadlocked hairstyle (which visibly marks him as more revolutionary than his assimilationist parents). The steady drumbeat of daily humiliations finally push Blue to the breaking point, and the film's cathartic denouement is as painful to witness as it is exciting to watch.

Despite its incendiary content, Babylon is hardly didactic. The script is full of humor, with much of the comic relief supplied by the actions of Beefy (Trevor Laird). Visually, the nighttime world of South London's neon haze and smoky clubs is reminiscent of Taxi Driver, thanks to excellent cinematography by Chris Menges (who had also begun his career working with Loach, earning his initial cinematography credit on Kes; Menges would later win Academy Awards just a few years later for The Killing Fields and The Mission before moving into directing). The acting is top-notch, led by a charismatic performance as Blue by Brinsley Forde, a former child actor who had starred in the Our Gang-influenced comedy short-films The Magnificent Six and ó in the late 1960s and its early 1970s TV series spinoff Here Come the Double Deckers! By the time of Babylon's production, Forde was the leader of Aswad, one of the UK's most important homegrown roots reggae acts, and Ital Lion's de facto anthem, played at the climactic sound system battle, is Aswad's "Warrior Charge." Indeed, besides its political concerns, Babylon also captured a pivotal moment in the development of black British music. Sound system culture and dub's spiritually enhancing sonic bath not only helped define UK reggae, it inspired future dance music genres, with its heavy bass sound shaping jungle, garage, dubstep, and grime.

Though its filmmakers were white, Babylon would anticipate further explorations of race and identity in the 1980s and 1990s by black British directors like John Akomfrah and the Black Audio Film Collective, Ngozi Onwurah, Isaac Julien, and more recently, Steve McQueen. Over the years, Babylon's vision of urban rebellion also proved prescient. In 1981, just a year after its UK release, there were riots in London's Brixton neighborhood, followed by unrest in other British immigrant communities, including Birmingham's Handsworth (which also erupted in 1985); London and several other cities exploded again in 2011 in the worst rioting in decades. Today, many of the same issues presented in the film remain sadly relevant on both sides of the Atlantic ("stop and frisk" being the American cousin of "sus"). Indeed, the film seems more timely than ever, as evidenced by the standing ovation it received at its sold-out US theatrical premiere at the Brooklyn Academy of Music in March 2019. As the theater's lights came up to reveal special guests Forde and Bovell onstage, several hundred members of the audience spontaneously serenaded the pair with Blue's cry of protest that ends the film: "We can't tek no more of that!"