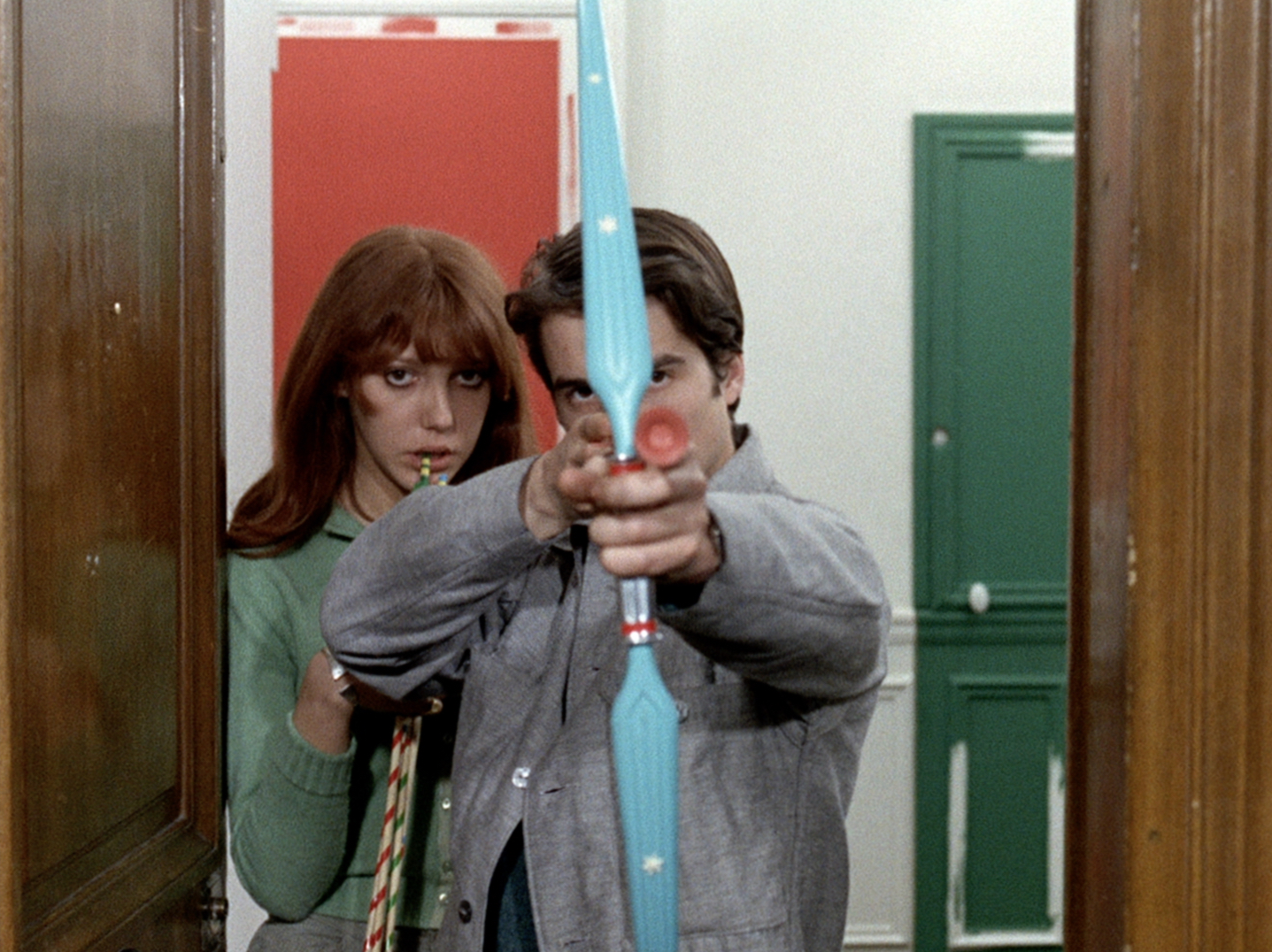 For thirty years, approximately 1970-2000, when I was in my twenties and thirties and forties, always a Godard devotee, I thought of Pierrot le fou (1965) as my favorite Godard movie, perhaps my favorite movie of all time. The period of his politics-first flicks, which followed quickly upon Pierrot—La Chinoise (1967) being more or less the first— felt tedious. I respected them, but they were too preoccupied with recondite Communist political analysis to hold my interest. Now that situation has reversed. Pierrot le fou seems dated and overly romantic, while La Chinoise is fresh and absorbing, a caress in its way, a thought-provoking caress. No, it's not a movie I could ever call my favorite in any broad category, but it is glorious to experience.

Godard's movies are superior notebooks. They are always about whatever feelings and ideas and experiences he is wrestling with at the time of their production. That's how, like Picasso or Bob Dylan or Frank O'Hara, he can be so prolific. "Cinema is not a dream or a fantasy. It is life. I see no difference between the movies and life" (Godard in 19681). His earlier movies were a little more pre-constructed, they tended to be riffs on the Hollywood genre films he loved—crime (Breathless, 1960), or science fiction (Alphaville, 1965), for example—or loosely adapted from novels, like Contempt (1963, from Il disprezzo by Alberto Moravia) or Band of Outsiders (1964, from Fool's Gold by Dolores Hitchens). The pre-existing forms were essentially hospitable pretexts he could inhabit with his current life and thoughts and feelings, but those models did provide some formal lineament. By the time of La Chinoise, any separation between his life—emotional, intellectual, aesthetic—and his filmmaking had been pretty much eliminated, and he proceeded to simply go on nerve and reality. For instance the five young main characters of La Chinoise have backgrounds similar to the actors who portray them; the science student is a science student in real life, the actor is an actor in real life, etc. Furthermore, nineteen-year-old Anne Wiazemsky, Godard's girlfriend at the time, with whom he lived and whom he married a few months after completing La Chinoise, plays "Véronique," and was in real life a university student, many of whose friends were university communist activists whose thought and actions would inspire Godard.

Communism was a respectable and widespread position in France at the time (and still is to a degree), especially among intellectuals, and by the mid-sixties passions raged regarding Gaullist authoritarianism, the recent Algerian revolt against colonialist France and America's war in Vietnam. The impetus for La Chinoise was the break between Soviet communism and Chinese communism in French intellectual circles. Godard's initial idea for the movie was to try to reconcile the two "against the common enemy: the Americans."2 As ever aesthetics are also ethics. The entire Cahiers du Cinéma auteurist revolution in film thought was grounded in this view, for instance, Luc Moullet's 1959 statement, written in a Cahiers defense of Samuel Fuller, that "morality is a question of tracking shots," to which assertion Godard soon applied a favorite intellectual tactic by reversing the teeter totter to contend that "tracking shots are a question of morality" (as per the famous sequence of dialogue in La Chinoise: "Art doesn't reproduce the visible. It makes visible." "But the aesthetic effect is imaginary." "Yes, but the imaginary doesn't reflect reality. It's the reality of reflection").

In fact, Godard's identification with the student Maoists and the Vietnamese is also a reflection of his own feeling of being oppressed as a filmmaker by Hollywood. He stated this explicitly in an introduction to the press book for La Chinoise where he advocated the overthrow of the oppressors "Hollywood-Cinecettà-Mosfilms- Pinewood" both aesthetically and economically. The imperialist oppressors had to be overthrown in society and in art. And that's the thing that finally moves me so much about this movie—the way it jettisons Hollywood values aesthetically as well as capitalist values morally. It demonstrates that a movie can be beautiful without being comforting or even having a narrative to speak of. Because the movie is beautiful. Godard had so fully absorbed all the existing means of cinema, that he could forget about them and simply follow his impulses and the results would be ravishing. La Chinoise overflows with his personal tropes and they succeed: the shot of a hand and forearm isolated, extended across the screen; the extreme color coordination, where he roughly paints patches of his set in a primary color and then his characters wear clothes that match it; the character addressing the camera; words printed (also in red, blue, or yellow) on the screen; artworks—sculpture or art prints or illustrations in books—presented… The poignancy and beauty of the sincere striving of youth. The complexity of thought in the presentation and discussion of the ideas that dominate the film, being mostly questions of how to make the world better; how thought-provoking those discussions are if you really listen. But, as I meant to say, the overwhelming thing is simply the beauty of the working of Godard's mind and sensibility, which is to say, simply, La Chinoise. It's not a propaganda film. He's not trying to persuade; he's questioning. It's propaganda for the importance of carefully looking and listening, without prejudice or preconceptions. It took me thirty years to get past my own preconceptions to see that for myself. I hope it comes more easily for you.

2 "Press conference at Venice, Jeune Cinéma, October 1967", as quoted in Everything is Cinema: The Working Life of Jean-Luc Godard by Richard Brody [Holt Paperbacks, New York, 2008]